Children's book author and advocate of families reading and writing together; mother of three fun kids.

Written and submitted by Bobby, 7 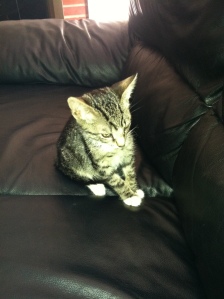 Jimmy the Cat as Bat Cat

The gray cat is very mean and robs the bank. Once Bat Cat called the cops and said, “I have brought evil to justice.” The police looked confused. They did not know what was weirder, a cat in a Batman costume or a gray cat tied up. They drove away.

Bat cat was yelling, “You forgot to take this cat to jail!” When gray cat showed up the next day Bat Cat yelled, “Avengers assemble!” and then a bunch of cats with avenger masks showed up and then a cat with an iron man mask jump out of nowhere. And  a  cat with a hawk  mask crashed through a window.  and then a cat  dressed like black widow showed up. The gray cat was shocked that Bat cat got him. Gray cat was sent to jail and everybody was happy.  The End.

Submitted by: the Bellwoar Gang

Once there was a girl named Elizabeth who really liked a boy named Jimmy. Elizabeth always wanted to act cool in front of Jimmy, so she did things that she thought would make her look cool. She usually ended up looking ridiculous.

One day, Jimmy asked Elizabeth to meet him at the top of Monkey Mountain, the steepest mountain around. It had a forest at the top that people said was spooky. Elizabeth was scared to go into the forest, but didn’t want Jimmy to know, so she said yes.

Her friend, Tracy, tried to tell Elizabeth not to go, but Elizabeth was sure that Jimmy was going to ask her to be his girlfriend at the top of Monkey Mountain, so she told Tracy that she had to go, no matter what.

Elizabeth heard a story that banana’s kept the spooks away when you went to the top of Monkey Mountain. So, she washed her hair with banana-smelling shampoo. She used banana soap, perfume, and lip balm. When she was done with all that, she even stuck a real banana in her hair with glue.

When she got to Tracy’s house, Tracy asked her why she smelled like a banana.

Elizabeth said, “No spooks are going to get me!”

The two girls started to hike up the steep mountain. They had walked a few minutes when they started huffing and puffing. Tracy wanted to take a break, but Elizabeth said they had to get to the top as fast as they could. She wanted to give Jimmy a kiss.

It took them five hours to get to the top. They were really tired, and Elizabeth sat down on a rock. Tracy sat down on another rock. Elizabeth was nervous about going into the forest. It looked pretty dark and strange noises were coming out of the trees.

“What about your kiss for Jimmy?” Tracy asked.

Elizabeth wanted to give Jimmy a kiss more than anything, so she stood up and started to walk into the forest. All of a sudden, monkeys started swinging from the trees like crazy.

Elizabeth never figured it out, but it was called Monkey Mountain because a lot of nice monkeys lived there – not spooks.

The monkeys  smelled all of the banana stuff Elizabeth was wearing and saw the banana on top of her head. They thought she was a banana.

They started climbing in her hair; trying to take off her shoes; and hanging on her arms.

Elizabeth started screaming and running around like waving her arms like she just fell into a pit of hot lava. She thought spooks were attacking her.  “Get them off me! Get them off me!”

Tracy tried to shoo all the monkeys away by making loud lion roars. All of the monkeys ran back into the forest. Except for one little one that was holding on tightly to the banana stuck in Elizabeth’s hair.  Elizabeth and Tracy didn’t see him.

Just then, Jimmy came out of the forest. Elizabeth saw him. She closed her eyes, puckered her lips, and was ready to give him a kiss.

When she opened her eyes, it wasn’t Jimmy her kissed her. It was little the monkey! He smelled her banana lip balm and had to have a taste. 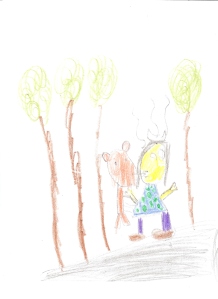 “EEEEEEWWWW!” Elizabeth screamed and pushed the monkey off her. She started spitting on the ground.

“Elizabeth? What happened Are you OK?” Jimmy asked her. Elizabeth kept spitting.

“That little monkey just kissed me!”

“Do you think it’s because you have a banana stuck in your hair?” Jimmy asked.

“Oh, yeah,” Elizabeth said. She got the banana out and handed it to the little monkey. The monkey ran back into the forest.

Tracy came over. “Well, Elizabeth, at least you got your kiss at the top of Monkey Mountain.”

“Yeah, from a monkey! I wanted to kiss Jimmy.”

Jimmy heard this and ran down the mountain screaming. The little monkey peaked back out and winked at Elizabeth. But Elizabeth said, “Don’t even think about it.”

At school, the kids made fun of them because they always got stuck in doors and their lockers. (The Jimmy boys would say, “Help me!” but the kids would just laugh.)

So Skinny Mary told them to go to the gym and work out. They all said okay.

They went to the gym and they saw some Hunka Hunkas, who made fun of them, too.

Big Jimmy got so mad he unleashed his power on everyone so they all kept getting bigger and bigger. Everyone screamed “Aahhhh!”

And Skinny Mary saw Big Jimmy out the kitchen window while she was washing dishes. “Big Jimmy? What are you doing?” But Big Jimmy didn’t hear her.

Then Skinny Mary flew to the city with her super powers. She used her powers to make Big Jimmy regular size and everyone else. And everybody was happy.

Keep an eye out for an upcoming story: “The Hunka Hunkas Revenge”

Are you for Team Jimmy or Team Hunka Hunka? Let us know!

Don’t forget to take part in our Summer Writing Challenge

Submitted by: The Bellwoar Gang

Then, he plotted his revenge. He wasn’t just going to throw tomatoes at the Ice Cream Man. He was going to fill up balloons with rotten tomatoes and launch them at him.

His mom said that they did. It was his dad’s birthday the next day and she just got a bunch.

“Do you want these balloons or not?”

“These balloons are light blue and say Happy Birthday! I can’t use these. I need balloons that say Revenge.”

“Well, then go get your own Revenge balloons,” his mom said and walked away.

Tomato Joe went to the store and asked the guy behind the counter if he had any balloons that said Revenge. The guy told him he had some black balloons that said Over the Hill. Tomato Joe thought these would be perfect balloons to fill with rotten tomatoes. That Ice Cream Man would be headed for the hills after he finished with him.

The next day, the Ice Cream Man didn’t play his music again as he turned onto Tomato Joe’s street. He crept up towards the house, hoping not to be seen. Tomato Joe was waiting behind a bush with 500 Over the Hill balloons filled with rotten tomatoes.

He saw the ice cream truck. He didn’t hear the music. He was filled with angst. No music meant there was ice cream. But he didn’t get any yesterday. What to do. What to do.

Just then his dad came outside. He saw the balloons.

The Ice Cream Man saw the two running towards him. He thought the dad was a monster chasing Tomato Joe. He started throwing ice cream bars at it to scare it away. The dad got hit a few times and ran to the back of the house.

Tomato Joe scooped up the ice cream bars and ran behind the bush.

The Ice Cream Man gave a nod, turned on his music, and headed home. He’d never be hit by tomatoes again.

One time there was this lady who loved muffins, so she cooked some. When the muffins were in the tin they said, “Oh no, we’re gonna be cooked like muffins!”

The lady had a robot arm and a peg leg.

The muffins tried to get out of the oven.

“We have to escape,” one said.

“I know,” another agreed.

Then, they did get out. The lady was so surprised, that she jumped three feet in the air.

The muffins were so angry, they kicked the lady into the oven.

[Mom’s warning: feel free to leave this line out – it’s a little violent]

Then, they turned the oven on and she got cooked.

The muffins decided to explore. But, the house was a mansion.

“This house is really big,” said the head muffin.

“Then we’ll talk on walkie-talkies,” one said.

“Yay!” the other muffins said.

So, the muffins split up and looked for an exit.

Some found a big indoor swimming pool. Others found the game room with a giant T.V. One found a huge bed and watched T.V. Another found a bathroom and brushed his teeth and gargled. 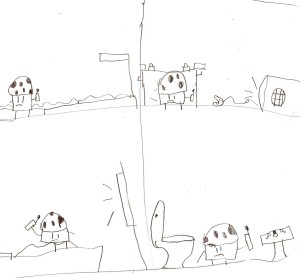 They found the door and started running around the city. They went into all the bakeries and started hitting the bakers with their muffin arms.

The muffins opened a coffee shop that made them a million dollars.

Do you think the muffins were a little harsh? We’d like to hear what you think.

I had a fun time reading “The Power of Ninja” to the Second Graders at St. Bernadette’s School. Thank you, Mrs. Slattery for inviting me!

It made me so happy to hear a few of the students are going to be writing their own books – and already have the titles.

Bobby is going to sign a few copies. Winners will be pulled from the Terrific Ticket bucket. Good Luck!!